We Attack At Dawn 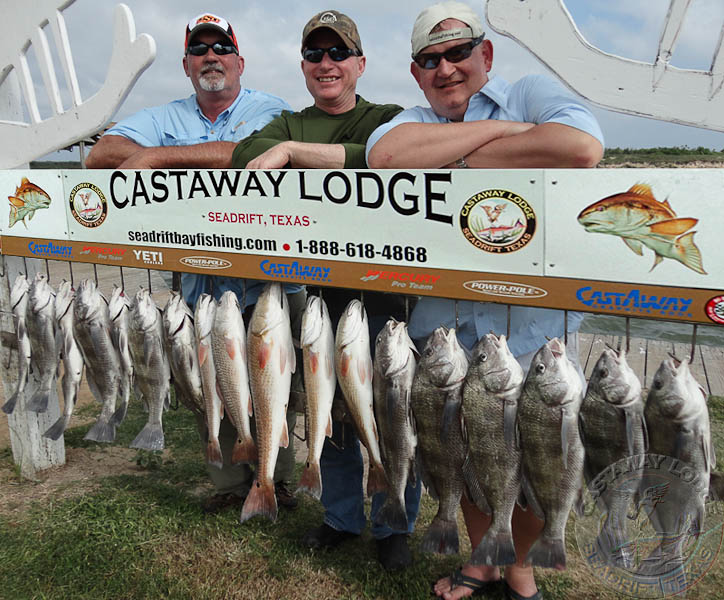 Oklahoma boys didn't hesitate to bring the big winds of their prairies down with them and man it has been scalding if not "ultra sporty" out there.  Capt. Chris Cady is at it this morning in winds of 28 knots with guests from Dallas and Austin.  Thursday's Trout successes with Shane H. and guests led to more success with Todd B. and Mike from Austin.  I managed to dial in pretty quick Thursday morning with the boys on a tight schedule and managed 22 Trout to 22".  Capt. James C. came in on my dialed in real estate over shell of varying depths as we were leaving and started thumping some solids to 20" with Todd B. and with winds elevating put together near limits for the boys fishing an afternoon half day.

Friday was a whole new world as winds elevated into the 20's and gusting as we hit the water with a great bunch of guys from OK.  Capt. James was on the dawn patrol and had been at it a few drifts as I was just fighting my way across the big water in my airboat with the other half of the crew.  I was certain James was in for big trouble.  The water was shredded in 99% of the locations we caught fish the day before.  As he often does, he dialed in on the 1% and was absolutely hammering the Trout catching 5 and 6 per drift over shell in ESB.  Capt. Doug was quick on his heels with Day 2 of Todd B's trip.  Things were slower for Capt. Doug but the boys were having fun and boxing a few.  I managed to find very scattered Redfish in any number of locations but visibility was tough.  We managed a nice keeper on each of four stops and then started hauling water for hours with no takers.  While Capt. James was crawling into the upper 20's on Trout I finally made a big real estate shift and went to working on some solid Drum in the 16 to 22" range with a virtually no Redfish.  We worked up a solid box digging it out with near limits of Black Drum and 5 Reds for the effort.  Capt. James ended up with 29 Trout to 21" and Capt. Doug finished up with a bakers half dozen putting in a lot of effort.

Winds ramped up even more on Saturday and that pretty much killed off the 1% of water that was still "doable".  Capt. James worked up a short box of Trout for the Mike F. and the guys that airboat fished with me Friday and then shifted to hunting Redfish over mud/grass.  With everything tore up he managed to get into some solid fish in the middle and upper slot.  I fought my way into the back reaches with the other half of the OK boys and we managed to haul some water on the first couple of stops before getting into the thick of things.  Dominant Black Drum saved the day with a few Redfish making an appearance here and there.  Size on the Blacks was really impressive and I think the guys appreciated the fight as much as they appreciated the delicacy of dining on them that evening.  Capt. Doug welcomed Charles M. and guests that decided excessive cold ones were much more inviting than the fishing. That led to a full box of empty beer cans and a handful of Redfish in the lower slot despite Doug's efforts which would have produced limits. A fun day on the water means different things to different people, "to each his own".

Charles M. and guests are working the back marsh with Capt. Chris C. and the boys on a half day.  I just talked to him and he said they've got one in the box and the prior days activities are probably pretty painful :)

We have the best guests that any lodge could hope for and the boys from OK were some really solid and tractable fishermen and a great new addition.  We enjoyed the visit and look forward to our years on the water and afield ahead.  Some of the crew were Skeeter sponsored tournament fishermen and the group of old friends all have "fishing names".  Wendi and I consider it an honor to have been given some names by the group as well.  Mine is "Meat Hook" and Wendi's is "Night Marlin", too funny.  We appreciated you all and your generosity.

A new week dawns and we wish you the best in your travels and challenges, come see us when you get a chance.

Transitions Ahead, Cooler Weather Ahead!

Slicked Off Surf to Cane Breaks, It's On!

Posted 7/20/2020/By Kris
From upper bay marshes to the surf, fishing continues